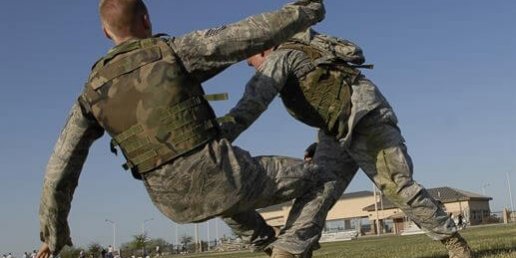 Students in martial arts, spend years learning spinning kicks, boxing punches, blocks, ground work and such stuff, to prepare them for what? For point fighting, sparing, controlled competitions, trophies? That’s all a lot of fun, as I did all that decades ago, but don’t be fooled into believing that you’re ready for combatives when you or your family’s lives are on the line.

Martial arts schools are big business all over the world, with teaching geared towards their “cash-cow” … parents and their kids. Parents pay for their kids to learn discipline, perseverance, respect, self-control, focus, and fitness, which are all great qualities. And also, they really like, that after-school, martial arts classes, are cheaper than a babysitter. Kids do it because they want to “be cool” and say that they know martial arts.

That’s all great for parents and kids, but, when you’re an adult and your goal is to learn how to protect yourself and your family from violence, then martial arts isn’t what you want to spend your time and money at.

Martial arts schools lull people into a false sense of security. They’ll give clients the impression that they can provide them with the capabilities to deal with life and death situations. Most will tell their clients, that they are the best and with their teaching, they can easily win any street fight.

Don’t be fooled. A violent predator has real combat experience, carries weapons and usually comes with a friend. Martial arts won’t get you through that. You may get lucky, as some do, but do you want to risk your life and those of your family, upon luck from what you learned in martial arts or self-defense classes?

Martial artists will say that when they’re confronted with violence, they’ll just “take it up a notch”. That doesn’t happen. Statistics show, that even with trained soldiers and law enforcement, there is a very high failure rate, when actual combat conditions occur. Many psychological and physiological factors contribute to this failure. Failure means dead.

When predators strike, violence of action is a key component required to survive, more so then technique or even surprise.

A smaller, weaker person, that has been trained for a handful of hours in COMBATIVS, will become formidable against a larger, faster, stronger predator, who isn’t expecting or prepared for violence of action.

Special military operators don’t teach or train in martial arts, because it’s proven not to work in combat. COMBATIVS will train you in Special Forces designed combatives.

Don’t spend years, and money on counter-productive martial arts techniques that can fail you. The COMBATIVS program takes you less time and is less expensive overall, than getting a black belt. You will be combat ready!