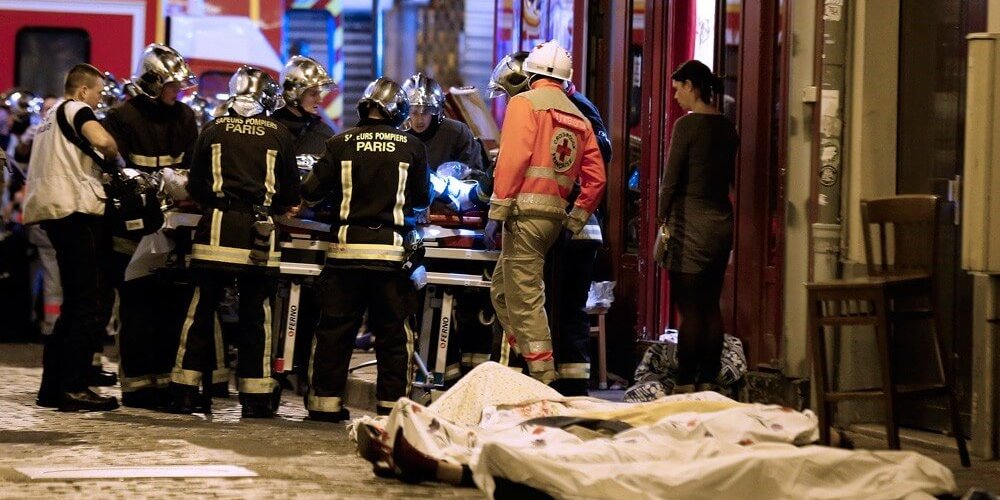 Terrorist attacks in public places are increasing every year. Attacks have taken place in restaurants; malls; concert, movie, nightclub and sports venues; schools; churches; in hotels; subways; airports; on the beach and the street. Home and workplace events, we’ll discuss separately another time. There really isn’t a place that would be safe from terrorism, as even fortified police stations, military sites and government buildings are targets.

Survivors that were interviewed later used words such as “fear”, “panic”, “surge of adrenalin”, “confusion”, while watching people screaming, running in all directions and dropping from being hit.

What is the best reaction? Should you drop down, pretend to be dead and hope they leave? Run in the opposite direction and hope you don’t get shot? Hide behind something? Rush the attacker(s)?

Some terrorists use bombs, which is impossible to predict or fight. Most bomb attacks, so far, have taken place in Europe, the Middle East and Asia. If travelling into these areas, exercise certain safety measures, such as avoiding crowded spots that cater to foreigners. If caught in a bomb blast, leave the area, if you can, to evade possible secondary explosions.

Cars, trucks or vans racing down the road hitting pedestrians, is another terrorist weapon of choice. Again, difficult to combat, especially when you’re with family or friends that also need protection. Move fast and dive.

Another weapon used in public arenas by terrorists is the edged weapon, such as machetes. Again, best to run in the opposite direction. If they’re right on top of you (and your family), you’ll need to strike them fast. Please, no knife-disarm techniques! Let him keep his machete. The person is your problem, not the blade.

During an active shooter situation, different options can be presented, depending on the scenario.

If you hear gunfire (can sound like firecrackers) but don’t see the shooter(s), look for exits in the opposite direction from shooting and head to one. Any others you see, tell them to come with you, as they may be frozen in fear. Grab any unconventional/improvised weapons along the way, as you may need them. Watch for shooters in all directions as you proceed. Once you get to an exit, check outside before you run out, as additional shooters have been known to wait outside for those trying to escape. Once you’re clear, call police. If no exits are available, grab any unconventional weapon(s), turn off cell ring, try to hide somewhere, preferably in a locked room. Wait it out. If discovered, attack ruthlessly.

If you can see the shooter(s), such as in a restaurant or at a movie, then dropping down, staying unarmed, hoping for the best, is actually the worse thing to do, although most people will take that option. A former SAS soldier teaches to rush the shooter(s) in a group. He’s right, that is the best option! However, realistically, unless there’s a group of SAS elites that decided to come in for pizza or watch a movie, you’re probably not going to get any volunteers for your group assault.

During an active shooting threat, you have a split second to decide what your option is. You can only run so far and so fast, so making it to an exit may or may not work, depending on the scene. If you have family with you, your options just shrunk. While you’re thinking, gunfire is erupting, people are screaming, people are running, people are dropping, and tables, chairs and tableware are exploding around you. You may get wounded.

You’ll have to attack through all of that.

This is actually the best option, when no exits are safely available and shooter(s) are visible.

Training in COMBATIVS will allow you to overcome the physiological and psychological hindrances that people experience in combat, even trained military and law enforcement personnel. You will also know how to use unconventional/improvised weapons to their best effect on a target or multiple targets. Many survivors of terrorist attacks suffer from PTSD that has ruined their lives. COMBATIVS training covers how to be psychologically prepared in advance to combat PTSD from afflicting you and your family.

Tip: Don’t rush in to struggle for a disarm. He may be stronger than you, your “disarm technique” might fail and for assault rifle/shotgun engagement, he/they may have the rifle/shotgun secured with tactical slings. If you do get the weapon away, do you know how to use it? And, any additional shooters will shoot you while you’re disarm struggling with his buddy. If disarm is a must, then learn the most efficient way to do it, especially with multiple shooters.

Terrorism is an evil that we must live with today. Ignoring it or hoping that it doesn’t come for you, is a fool’s way to prepare for it. Be prepared. Keep yourself and your family safe! You’re worth it.