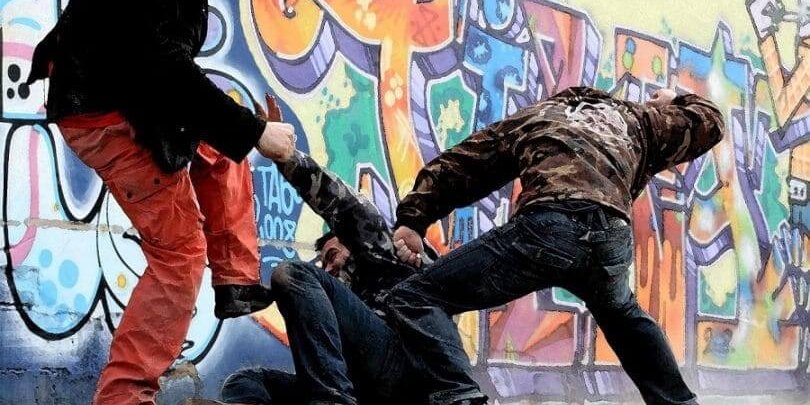 Multiple attackers: Scenario #1: You’re on vacation with your family. You all walk out of a restaurant, turn the corner and there’s a group of five guys there. One sucker punches you as you’re walking by. As you start to come around, they’re in the midst of raping your companion. One is pointing a knife at you.

Scenario #2: Three men kick in your front door. One has a gun. Maybe the others do too. You’ve heard about this group in the news. They don’t leave any survivors when they’re done.

Scenario #3: You’ve just got your Black Belt in a popular martial art. You’re in great shape and have won lots of trophies in competitions. You’re walking to your car daydreaming when you’re suddenly surrounded by bigger, stronger guys. Before you can blink one of them gets you in a sleeper hold. You have less than 10 seconds before you black out. If he sustains the choke, you’ll die. The others move in. There are no refs, no rules and no trophies. Just life or death.

Whatever you do, don’t “fight it out” with them, like instructors are teaching in schools and online. Punching one in the face and then moving to the next to roundhouse kick him in the side, to move to the next to grapple him … are all failures.

I watched a real video on YouTube of four unarmed guys that attacked a guy and his girlfriend. The victim punched the first one that came in, and he fell down. Then the same with the next one. By the time he got to the fourth one, the first two were back up and coming in again. He had to deal with the same ones over and over, knocking each one down… temporarily. Fortunately for the victim and his girlfriend, these four were lousy predators, had no weapons and finally just gave up and walked away. Jason Statham, etc. do the same junk in movies… attacking the same one over and over.

Luck does happen, but, in the above three scenarios, this ‘fighter’ would have died using his tactics. And what about his girlfriend? His ‘fight’ training would have failed them both, unless the police suddenly showed up. Or, someone trained in real combatives (not the MMA stuff they teach in the military today) stepped in to save them. In that YouTube video case, all the people around them just watched or walked off.

Not only is proper COMBATIVS ‘finishing’ tactics required in order to effectively deal with multiple, armed predators, but psychological and physiological training must be engineered in, to overcome the ‘freeze factor’. This advanced combatives training is used by high-level US Government agencies, to prepare their elite, special operators for high risk missions.

Civilians need this training also, as the world has become too dangerous for the general public to live unprepared for violence.

COMBATIVS will train you to have the best chance to survive against multiple attackers.