About 1 out of 3 homicides in Canada are by stabbing.

Homicides by stabbing is the preferred method in most countries around the world (except USA) where firearms and ammunition are hard to get and expensive.

“Outside of the Americas, knives are often the weapon of choice.” Smithsonian.com

“The number of offences involving knives in England and Wales has risen to an all-time high after 43,516 were reported to police, official statistics have revealed”. July 2019

These statistics show us that knives are the weapon of choice for predators and attackers around the world, especially in countries that have strict gun control laws, like Canada and Europe. 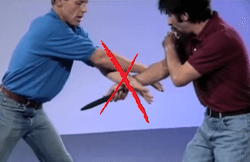 When they do, it’s usually some blocking or disarm technique.

Statistics show that knife-disarm fails about 100% of the time.

That means you don’t go home.

Yet, they still teach it. 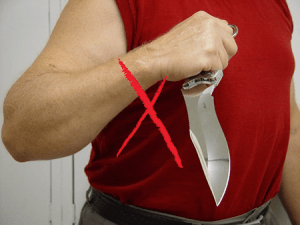 Training in how to use a knife is even more of a rarity for some reason and rarer still is competent training.

Usually, it’s some strange reverse grip style that they wave around that they say they learned from some Navy SEAL DVD.

It was over in 1 second.

He wasted time and money on what would have probably killed him one day.

I won’t teach you anything that isn’t combat-proven to work.

Why would anyone do that to you?

Why would anyone want anything less than what will save their life and perhaps save the lives of their loved ones?

There won’t be any failed martial arts “techniques” or flashy Hollywood junk.

It’s just a 2-hour training course held at your location when it’s convenient for you.

Bring your family and friends (1 to 6 people at a time).

Achieve the EDGE TO SURVIVE.

Be confident that you’ll get home every night with the…

Prior training not necessary.

Training can be arranged at offsite location (additional cost).

Training may be temporarily delayed to accommodate client or instructor for medical reasons; weather preventing travel; family or business commitments. Training resumes on schedule when the circumstance has cleared.

At least 6-hours notice is required prior to cancelling a training session.