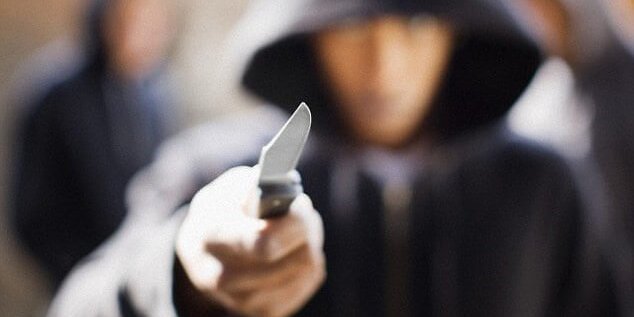 Knife attacks: “In 2008, a knife was used against 6% of all victims of a violent crime. Included in this category are other cutting instruments such as broken bottles, screwdrivers or scissors. In comparison, 3% of violent crimes were committed with a club or blunt instrument and 2% with a firearm.

“Outside of the Americas, knives are often the weapon of choice.” Smithsonian.com

These statistics show us that knives are the weapon of choice for predators and attackers around the world. Especially in countries that have strict gun control laws, like Canada.

What gives a COMBATIVS practitioner the advantage against knife predators?

In COMBATIVS, training in edged weapons is based on combat proven results.

Carrying a knife around doesn’t protect you. Knowing what to do with it does. And what happens if you drop it or the predator takes it away from you? All failures to survive, unless… you’ve prepared yourself against all probabilities in COMBATIVS! Which means also trained in unarmed, unconventional/improvised weapons, firearms, multiple attackers and the essential ingredient that every military Special Operative is trained in, or they know that the rest of their combatives training can fail them in actual combat. Martial arts, MMA and self-defense classes don’t teach this ingredient either.

Why train to fail? Your life and the lives of your loved ones are worth what it takes.

COMBATIVS will train you to have the best chance to survive against knife/edged weapon’s attacks.